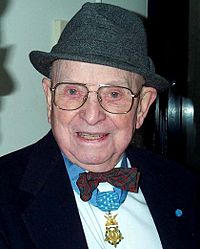 Sgt. Oresko was a platoon leader with Company C, in an attack against strong enemy positions. Deadly automatic fire from the flanks pinned down his unit. Realizing that a machinegun in a nearby bunker must be eliminated, he swiftly worked ahead alone, braving bullets which struck about him, until close enough to throw a grenade into the German position. He rushed the bunker and, with pointblank rifle fire, killed all the hostile occupants who survived the grenade blast. Another machinegun opened up on him, knocking him down and seriously wounding him in the hip. Refusing to withdraw from the battle, he placed himself at the head of his platoon to continue the assault. As withering machinegun and rifle fire swept the area, he struck out alone in advance of his men to a second bunker. With a grenade, he crippled the dug-in machinegun defending this position and then wiped out the troops manning it with his rifle, completing his second self-imposed, 1-man attack. Although weak from loss of blood, he refused to be evacuated until assured the mission was successfully accomplished. Through quick thinking, indomitable courage, and unswerving devotion to the attack in the face of bitter resistance and while wounded, M /Sgt. Oresko killed 12 Germans, prevented a delay in the assault, and made it possible for Company C to obtain its objective with minimum casualties. 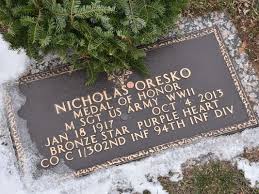 Below is a video of our post placing a wreath on NIcholas Oresko's grave.